Well hey there you! How are you going?

Here at ALIA Graphic Novels and Comics we have had a pretty productive year despite the fact that this particular year has been 2020. We are quite proud of our achievements and it has been a bumper of a year for creativity so there have been plenty of great comics and upcoming comic news for us to discuss, so obviously we would like to share some of our valiant accomplishments and collaborations.

Believe it or not we also still managed to find the time to enjoy reading a few fabulous comics. Check out some of the comments below or listen to the latest podcast to enjoy the exuberance of some true graphic novel superfans.

Our Favourite Graphic Novels and Comics of 2020 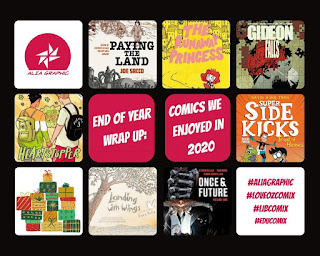 Gabby - The Runaway Princess - Johan Troianowski (Random House Graphic) France
“I found picking my book of the year quite challenging, which I think we all did. My favourite graphic novel of the year was ‘The Runaway Princess’. It’s such a fun graphic novel, bright and colourful, really accessible. There are three short stories in it and they follow Princess Robin who doesn’t really like to stay in her castle, or do what her parents ask of her. It’s also interactive and there are a few pages where you have to help her on her quest.”
Iurgi - Paying the Land - Joe Sacco (Metropolitan Books) US
“Joe Sacco travels to North-West Canada to talk to the Dene people, the indigenous people of North-West Canada and Sacco, he listens and tells their stories and we learn a lot about the way they live, their traditions and their culture, but also how that culture and those traditions and their way of living has been affected by Canada, colonialism and mining and fossil fuels. We also learn about how the communities are organising themselves and trying to find back and preserve their culture.”

“I would love for someone to do a graphic novel like this in Australia as well, because I think there are a lot of similarities.”

Jade - Heartstopper Volume 3 - Alice Oseman (Hodder Children's Books) UK
“Alice Oseman can capture some pretty fantastic facial expressions, feelings and emotions, which I really love. The Heartstopper series follows characters Nick and Charlie, who first appeared in Oseman’s debut novel Solitaire. In the novel they were depicted as a committed couple, and this series is their journey of getting there. The series discusses some significant concepts for Young Adult audiences such as homophobia, mental health and diversity, and everything is dealt with a really considered and gentle touch.”
James - Once & Future Volume 1 - Kieron Gillen, Dan Mora, Tamra Bonvillain (BOOM! Studios) UK
“Volume 1 is titled ‘The King is Undead’ and it sees Duncan get caught up with his grandmother who is a gun-toting, chain-smoking badass. She pulls him into a world of monster-hunting, caught up in Arthurian legends. I came across this because I am a massive fan of Kieron Gillen’s recently completed series ‘The Wicked + The Divine’. I wanted to see what he was doing with Arthurian legends, and what he’s doing is turning it on its head.”
Melody - DCeased - Tom Taylor (DC COMICS) Australia
“DCeased by Tom Taylor was my favourite of the year primarily because it was so different from the things I usually read. It was basically a massive zombie apocalypse story except for the fact that it really affects everyone - DC heroes included - and nobody was safe! Quite timely really. It was super sad to watch your favourite supers go down, but it continued to do what DC has always done for me, left me with a sense of hope, despite the hopelessness.”
Sarah - Landing With Wings - Trace Balla (Allen & Unwin) Australia
“Landing With Wings’ is the graphic novel I have been talking about all year. It’s the third Trace Balla has put out, and it came out in April this year which was at a really significant time for us. This story is about a little girl, Mary-Blossom, and her mother, who have moved to a country town in the goldfields of Victoria. It was a book that gave me and my little girl some comfort because it is very Australian in the best way possible.”

“As soon as you open up the book, Trace Balla is so respectful of Indigenous culture. The end pages have little illustrations of flora and fauna, but they all have indigenous names accompanying this and I think that’s really important.”

Tara - Gideon Falls Volumes 4 and 5 - Jeff Lemire, Andrea Sorrentino, Dave Stewart (Image Comics) US
“Gideon Falls is an American horror story involving the appearance and disappearance of a Black Barn, which was somewhat inspired by the Black Lodge in Twin Peaks. And the frightening inhabitant called the Laughing Man, who has a horrific smile from ear to ear. We have Norton Sinclair, one of two protagonists, who has an obsession with a conspiracy involving the city’s trash. And then we have a washed-up Catholic priest, who is assigned to a rural parish that is experiencing a number of mysterious murders. The story moves between rural and urban landscapes, and goes into alternate realities. And the artwork and colouring gave so much depth to the story, there are lots of little details in the imagery; in the corners, on the backs of the walls. The imagery of the Laughing Man is something of childhood nightmares; something deep in the psyche.”

We end the year with a very special creator chat with Holly Jayne. Bunnygirl is her first graphic novel which she initially published as a zine and was then picked up by a publisher.
Holly talks about toys, books for kids, craft, and so much more!
This is a great chat and an inspiring story to end the year.
You can find out more about Holly and her art on Instagram: https://www.instagram.com/artofhollyjayne/
If you like what we're doing, please hit the subscribe button to stay up to date with our chats. You can also follow us on Twitter: @ALIAGraphic and check our blog, aliagraphic.blogspot.com, for updates, monthly roundups of news and new release titles.
Posted by Melody Beier at 12:30 No comments:

We're heading towards the end of the year, and that means shortlists, longlists, and everything in between to celebrate the best comic books of 2020.


Graphic novels, comics and art as a whole have had a big impact this year as we've all needed something that connects us to ideas and feelings outside of ourselves. Whether it is through good art, other people, or new experiences, comics have anchored many of us during a time of great upheaval, stress and isolation. We may not know what the future holds, but we do know that some excellent graphic novels and comics have been made this year, be it online or in print.

Our November roundup podcast is out now on Apple Podcasts. In this edition we discuss the big year that comics have had on Kickstarter, the upcoming graphic novel based on Anthrax's classic Among the Living album with an incredible line up of creators and the Ledger Awards' shortlist for best Australian comics. The team also highlights their favourite picks for the month.

Below, we have collected some great end-of-year lists, shortlists and other comic book highlights from 2020, including the Ledger Awards Short List, which will be decided from over fifty Australian comic creators, as well as recommendations from American orgs such as the American Library Association and the Young Adult Library Services Association for you to check out. We have also included some thoughts, resources and how-tos to get you (or others in your library) making, creating and having fun with comics. Enjoy! 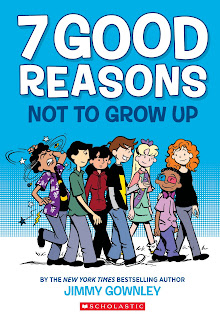 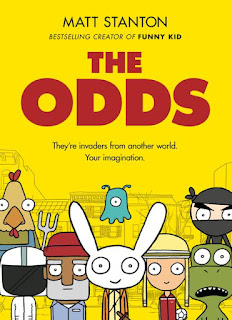